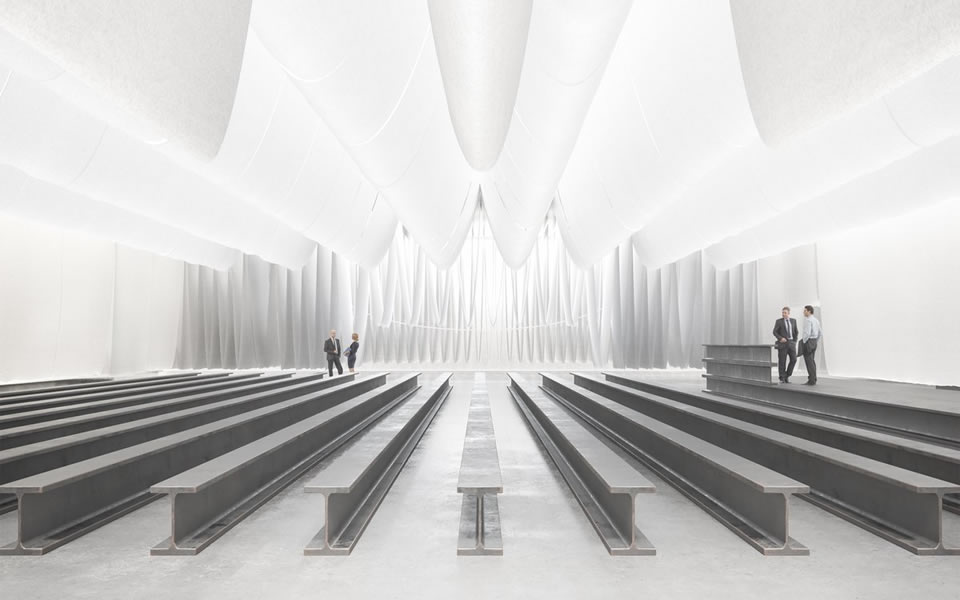 Josep Ferrando’s prestigious architecture studio will be responsible for designing the thematic spaces in which the next edition of the Barcelona Building Construmat, the Fira de Barcelona International Construction Trade Fair, will be held. Thus, Josep Ferrando will give shape to the Future Arena, the Talks Arena and the Meetings Arena event spaces, with a project based on the use of large, white curtains and construction features such as beams that will be used as benches or counters, in an example of ephemeral architecture and the circular economy.

BBConstrumat is following the trend started at the 2017 edition in which it decided to commit to presenting an ephemeral architecture project to make the visitor experience more attractive. At this edition, the most emblematic construction trade fair in Spain has entrusted the design of its common spaces to an architect of renowned prestige in the field of ephemeral installations and the use of recyclable materials.

We are talking about Josep Ferrando, an architect who graduated in 1999 from the Barcelona School of Architecture (ETSAB by its Spanish initials), and has undertaken various individual, group and social housing works in several cities, as well as in proposals for public spaces, interior design and product projects. He has also worked as a lecturer at the ETSAB since 1998 and has given lectures at various universities and congresses, including the Harvard University GSD, the Pontifical Catholic University of Chile, the HCU in Hamburg, the Facoltà di Architettura in Palermo and the UIA’11 in Tokyo.

WoodenBeams from the Sagrada Familia
Ferrando’s project has been carried out in partnership with of Construction Board of the Sagrada Familia in Barcelona, who will provide some of the large, wooden beams that are being used in the construction of Antoni Gaudí’s greatest work, and with the Suprema company, which will provide the translucent fabrics that will be used in this initiative as aspects of the BBConstrumat 2019 shared spaces.

Once the trade fair is over, the beams will be reused in the works to complete the Sagrada Familia and the materials will be used in other indoor or outdoor design projects, as a token of BBConstrumat’s commitment to the circular economy, which will also be highlighted during the trade fair, defined as being a carbon neutral event that does not generate waste. In this regard, amongst other actions, waste paper will be collected and surplus food will be donated to the NGO, Nutrition without Borders.

BBConstrumat will take place from 14 to 17 May 2019 at the Fira de Barcelona Gran Via venue and this 21st edition of the event will bring together a broad sample of all the sectors that give shape to the Spanish construction industry.