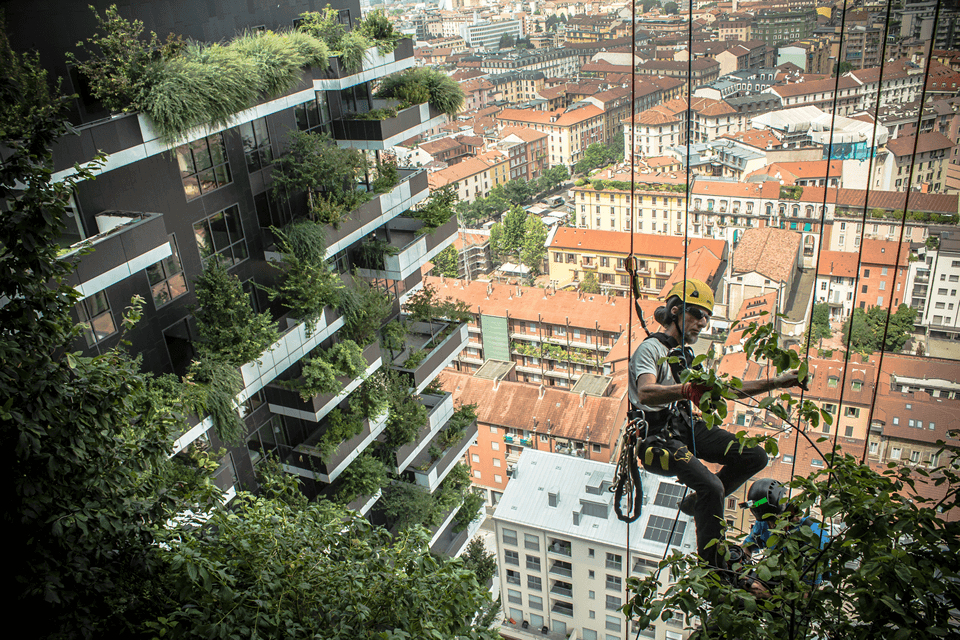 We could say that Patrick Blanc was the pioneer of what is now known as the vertical garden. However, the system devised by the French botanist is just one of many that are currently being marketed. The truth is that, thanks to him, the concept became popular and today green façades are an increasingly common resource to replace the lack of greenery in corporate buildings, hotels, restaurants or even in residential buildings, where every metre counts, and horizontal gardening is not always affordable.

Perhaps this is what makes vertical gardens successful for their promoters: the compromise between not using too much surface area and the green impact that is created from the outset. If we add to this the direct benefits to health, with the plants absorbing CO2, releasing oxygen, stabilising atmospheric dust, trapping heavy metals and acting as a powerful heat and sound insulator, making these green walls an optimal solution for urban environments.

It is fair to say that it’s not all straightforward, as flipping the surface of a garden 90º implies a change in the natural balance of the soil that must be compensated for using technical solutions that do not deplete the nutrients in the substrate. It also implies a change in the concept of what we, as users, understand as a garden: this surface of vegetation becomes a backdrop, a façade and a picture to be admired, in short, a landscape to be contemplated and not for walking through or spending time in.

The complexity of solving such a challenge translates into a multitude of marketable systems, whether they are made from felt, growing cells, modules, planted on-site, planted in nurseries, using hydroponics or with a traditional substrate… And as often happens in architecture, there is no optimal system for building a vertical garden, but rather a range of solutions that must be adapted to the project based on the determining factors of design, location, size and budget. We will now present some cases that resolve the challenges of vertical gardening in very different ways.

With a system consisting of over 400 conventional planters with plant substrate, the architect Félix González Vela and the landscape designer Manuel Pasquín Agero, conceived a garden inspired by the Hanging Gardens of Babylon that would provide attractive views from the rooms facing the interior courtyard of the hotel. However, the Santo Domingo garden has accomplished much more; it absorbs 25,000 kg of CO2 per year and releases enough oxygen for around 200 people to breathe each day.

Its designers were able to take advantage of the scaffolding from previous construction works, which today constitute a skeleton of about 300 linear metres, which holds the garden in place. The main advantage of this system is that it allows access for maintenance, as the scaffolding provides covered walkways which can be walked through and, therefore, the use of cranes or lifting platforms is avoided. In addition, with this simple feature a wonderful air chamber is created that prevents damp from appearing and which also provides powerful thermal and acoustic insulation.

The planters include over 2500 plants, amongst which shrubs, climbers, herbaceous plants can be found, as well as trees, some reaching 5 metres in height. It is important to emphasise the sustainability of the project as a whole, given that a proportion of the water used in the showers and washbasins in the hotel rooms is collected, filtered and cleaned to be reused in the drip irrigation system. In addition, the hanging garden includes a 20 m cascade that guarantees a constant level of humidity. With surface area of 844 m2 is the largest vertical garden in Spain.

The largest vertical garden constructed in the world to date is located in Colombia. Carried out by the Colombian company, Groncol using the technology of the Spanish company, Paisajismo Urbano, it has a surface area of more than 3,100 m2 and a vegetation coverage made up of almost 115,000 plants of 10 species and 5 different families.

The façade of the Santalaia building is a true vertical ecosystem in the middle of Bogotá, a project that has promoted the use of endemic, endangered species and that has also converted it into a building which attracts fauna. Its designers explain that with this density of plants per square metre, the vertical garden produces enough oxygen for more than 3,100 people a year; it processes some 775 kilogrammes of heavy metals and filters more than 2,000 tonnes of harmful gases.

The system devised for the Santalaia building is very light and consists of four layers. The first layer consists of a metallic batten system which has waterproof panels attached to it that make up the second layer. A double layer of textile material is attached to the panels, which serves as both a mount and as a hydroponic substrate for the last layer, which is the plants. The textile layer also contains the irrigation system, which is easily accessible whenever necessary.

In this garden every drop of water counts, therefore the irrigation is divided into more than 40 sections that are regulated in accordance with the humidity and solar radiation. Additionally, the system has a rainwater collection and treatment plant that recycles excess of water from the green wall, as well as the grey water produced by the building, in order to recycle and use it in the system.

In the Bosco Verticale (Vertical Forest) project, Stefano Boeri replaces the traditional wall covering materials with screens of vegetation in such a way that the plants act as an extension of the outer part of the building. Much more than a vertical garden, the internationally renowned architect, designed a façade that consists of two towers, 80 and 112 metres high, which house 480 large trees, 300 small trees, 11,000 perennial plants and 5,000 shrubs.

The selection of plant species is the result of three years of research carried out in conjunction with a group of botanists and ethologists. The plants that are used in the building were cultivated beforehand in a nursery, emulating the conditions which they would be under if they were kept on balconies. The vertical forest creates a micro-climate which can be inhabited by birds and insects, and in an initial census, 1,600 types of birds and butterflies were recorded.

This vertical forest in Milan is not the only one. Boeri’s studio has already launched similar projects in Paris (Forêt Blanche), in Utrecht (The Hawthorne Tower) and in Nanjing, China (Nanjing Vertical Forest).