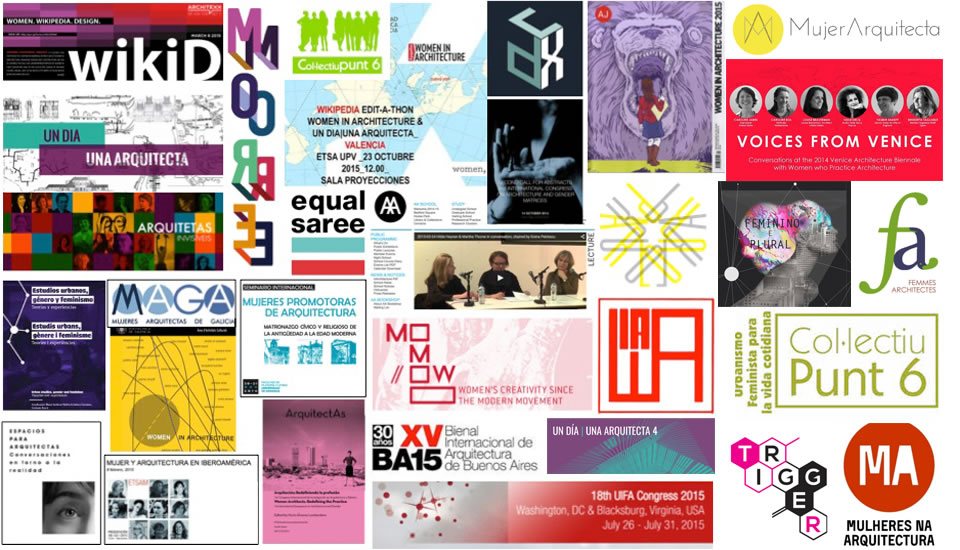 The forgotten women and their contributions throughout history, in any activity and field of knowledge can, in principle, represent a form of carelessness, distraction and indifference. However, forgetting is a contradiction in itself, as although it is involuntary, it is possible to realise what we have forgotten and what we have left behind. This antinomy assumed by forgetting these women is inextricably linked to the manipulations and dominations to which the memory is submitted as a result of the various forms of representation of the past; one them being the historical narrative.

It is known that the history of architecture is no exception: a common factor buries its roots beyond the architectural field which means we cannot just recognise the absence of women and the ways of relating the past if we do not perform a deep, historical and interdisciplinary reflection on the mechanisms that have promoted and continue to promote this discrimination. Reflecting on two irrefutable yet initially contradictory premises can be one way: the first, that women have in fact been present in the design and construction of homes, facilities and cities since ancient times; the second point is the lack of renowned female architects, a fact that has been evident throughout all periods in history and significantly from the 20th century onwards, with editorial generalisation and the emergence of media and its various methods to disseminate architecture.

If women have in fact been active and present at all historically decisive moments of culture, why are female architects forgotten? Why, asks Celia Amorós, is there no trace of women entering the public space, and why has their passage been erased? Why has the figure and contributions of female architects not been consolidated into our collective imagination with the same effort and equal conditions as male architects? “Half of the planet’s intelligence” has been underestimated due to the growing belief that female architects did not form part of architectural history or that their contributions have not stood out enough to be published; or on cases in which they have been considered, it is assumed that they occupied a secondary role, as inspirations, collaborators and protagonists of “lesser arts”.

This scenario of an absence of female references will be the main consequence of the identity that architectural culture has constructed and assigned to women in different practices and conventions. An identity that reinforces and retro-aligns in narratives of exclusion that are nothing other than the result of gender discrimination in the definition of roles and capacities. However, the exclusion from the account is not the only discriminatory practice. Associated to linguistics, a non-sexist language is one that does not exclude, of course, but it is also one that does not hide, subordinate or undervalue.

In turn, these narratives that exclude women in architecture cannot be disassociated from the narratives of exaltation, that is to say, from accounts in whose foundation the essence of the aspects that define masculinity is found. According to Luis Bonino, four basic beliefs are discovered in this construction: prestigious self-sufficiency, belligerent heroism, respect for hierarchy and superiority over women and opposition to them. Developing the architectural account will therefore involve the historical representation that has made women “different” from “men”. In this regard, Rosi Braidotti highlights the paradox observed in the fact that women are defined by others, as they are defined as “others”: they are represented as different from men and this difference is valued negatively.” This difference will constitute an inferiority trait that, as the author expresses, is assumed as normal among arguments of misogyny in our culture.

In this regard, the analysis of the fundamental texts of the 20th century prove that discrimination is also in the forms of production and work as individual work is recognised above that of a team, making the presence of women in the accounts even less likely. Narratives on buildings or emblematic urban plans assigned to a single designer are abundant. Some examples are the Unité d’habitation de Marseille, where Charlotte Perriand and Blanche Lemco were responsible for the design of the kitchen and games areas and nursery of the housing project respectively, co-authorship such as that of Anne Tyng in works such as the City Tower, or the huge responsibility in the works carried out by Jane Drew and Urmila Eulie Chowdhury in the city of Chandigarh.

TNor have they had recognition or media acknowledgement in their discipline in other professional areas beyond the final constructed work or the project such as in urban planning, landscaping, design, structure history, theory, critiques, education, etc., and even less so if they do not come from Central Western countries. Even forming part of the privileged circle and in the pole of modern changes, the multi-faceted work of Lilly Reich, co-founder of the Deutscher Werkbund and its director between 1922 and 1926, professor of the Berlin and Dessau Bauhaus Schools and co-author of the Barcelona pavilion and the Villa Tugendhat, is one of the forgotten greats of the historical accounts. Or contributions in the field of urban planning, such as the Amsterdam General Extension Plan attributed solely to Van Eesteren and omitting the work of Jakoba Mulder; the design of the city of Canberra was solely attributed to Walter Griffin, excluding Marion Mahony; and Catherine Bauer who is systematically omitted and her book Modern Housing is only peripherally referred to in a few instances.

Several of the highlighted professionals at the cutting-edge of architecture during the inter-war period were active integral parts of the various editions of the International Congresses of Modern Architecture (CIAM in its French initials): Margarete Schutte-Lihotzky, whose highlighted career dates back to works with Adolf Loos in the public administration providing innovating domestic architecture and whose work was essential for the Neue Frankfurt Housing Project, designer of the “Frankfurt Kitchen”, collaborator and editor of the magazine Das Neue Frankfurt (1926-1930), she also participated together with Lotte Stam Beese on the soviet projects in the May Brigades; Helena Syrkusowa, , Polish architect and teacher, co-founder of the Praesens Group (1925) strongly linked to the CIAM for whom she was vice-president between 1945 and 1954 was one of the editors of the Athens Charter (1933); Minnette De Silva, representative and pioneer of the Sri Lankan regional Modern Movement, designer, publisher and editor of the magazine Marg, as well as being a delegate for Ceylon and India at the CIAM until 1956; Sadie Speight, who received the silver medal from the Royal Institute of British Architects in 1930 and was co-author of the publication Circle, a manifesto on constructivist art in 1937; Jane Drew, renowned British architect whose international work was rooted in the economy, comfort and environmental quality, founder and promoter of the M.A.R.S research group to promote the ideas and practices of the Modern Movement in Great Britain; and Jaqueline Tyrwhitt, British urban planner, journalist, publisher and educator, who was key in the transnational network of the modern post-war period, theorist of decentralised community design, residential architecture and social reform, as well as publishing books such as Patrick Geddes in India (1947), Human Identity in the Urban Environment (1971) and acts of the 8th CIAM Congress: The Heart of the City: towards the humanisation of urban life which she also co-wrote.

All of them were protagonists in reflection and research groups in their respective countries and internationally, they shared with their male partners and colleagues work spaces, experiences and knowledge, and they contributed their opinions to projects, statutes, articles and publications. All of them appear and disappear from the history of architecture in which they are recognised in a unique way in the action and in the dual gender and exclusive discourses which do not recognise other genealogies. A system of values that constitutes the dominant ideology, whether by class, ethnicity or gender, which imposes its mechanisms and contextualises and constrains history and as a result, the historiography.

However, there are and have been alternative strongholds of resistance, of assertion, which oppose this official historical account and proclaim an inclusive one. These spaces form a framework for the construction and reconstruction processes of the collective memory, which is changing, it is alive and is essential to combat the account imposed on us.

Yes, that which has been forgotten is actually full of memories and without it we would be condemned to the “eternal return”.

In this sense feminist activism works to raise awareness, protect and promote the collective rights of women. From 2014 onwards we have seen an increase in publications and surveys on the situation of women in the profession. There was also an expansion of blogs and web pages and a generation of networks, symposiums, meetings and congresses, critical theories, previously written biographies of architects and designers, and the actions of many collectives who have been working on in feminist urbanism for many years were also recovered. In 2018 and to date in 2019 this assertion has been evident in architecture and in all professions. Women linked to architecture meet to share knowledge, to reflect, debate, question and theorise. In the arts and literature we also observe transformations in contents, actions and assertions. In the streets and neighbourhoods. On a global and local level. We are living in years of feminism… Could this be the fourth wave? This current period honours, gathers and learns from the experiences of the past. Feminism has become immense, diverse and in some respects contradictory. As women, we are getting to know ourselves once again as a collective and we value our differences; multiculturalism, class difference and the socio-political context, circumstances that separate us whilst at the same time find us in a communal subjectivity of the ‘feminine me’. A favourable context to change the point of view, for the problematisation, the reinterpretation and the conscious viewpoint from our own present in terms of creating distinct assessment systems from those that are traditionally endorsed.

The promotion of critical thought requires the formulation of new questions and a deep reflection that involves the personal and political spheres, from the domestic to the institutional and from the local to the global; on gender differences and the opportunities and threats from which these arise in the profession; the urgency of academising the history of women and consolidating their genealogy; as well as updating concepts of handling and organising the power, authority and legitimacy of female architects.

If memory indicates recovery, a counter-memory will involve a revealing, review and change of trajectory in history. To review what has been given to us and to delve into all previous generators of critique emerging in times of deep social change, from the constructive and urban proposals of silenced female architects to the extensive production of feminist theory of the sixties, to give just two examples. Only then will we be able to rewrite a broader, fairer and inclusive history and aspire to a paradigm shift towards real equality.

HEYNEN, Hilde. Places of the everyday. Women critics in architecture.
Proceedings of the Conference, Gendered Landscapes. An Interdisciplinary Exploration of Past Place and Space (2000), 113-120.

Note: “El olvido está lleno de memoria” (The Exercise of Discretion: Oblivion is full of Memory – in its English version) is the title of a collection of poems by Mario Benedetti for the Editorial Seix Barral in 1995.