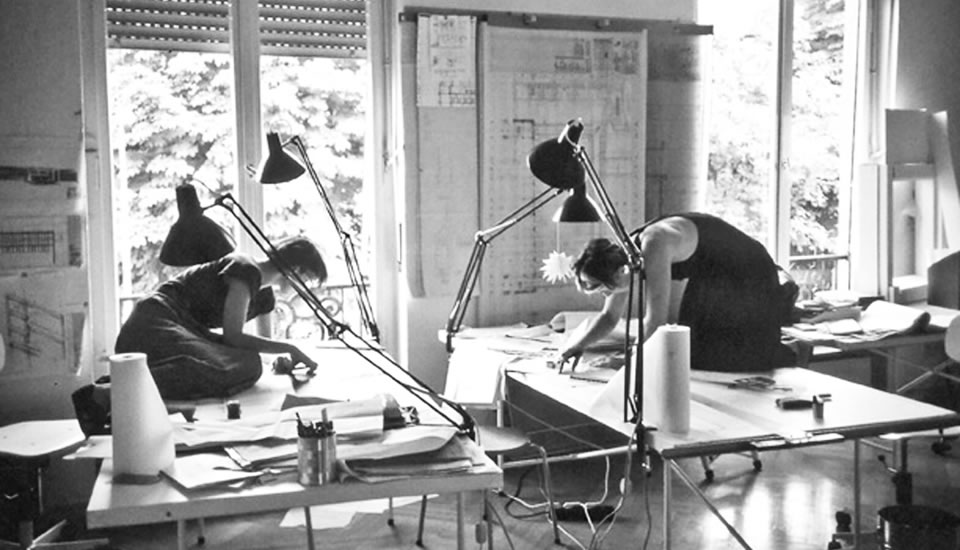 Coincidentally, Women’s Day was celebrated just one day after the awarding to Balkrishna Doshi of the 2018 Priztker Prize, the most prestigious international prize presented to a living architect in recognition of the importance of their career. Throughout its history, the Pritzker has been awarded to only three women: Zaha Hadid in 2004, Kazuyo Sejima (together with Ryūe Nishizawa – SANAA) in 2010, and Carme Pigem (together with Rafael Aranda and Ramón Villalta – RCR arquitectes) in 2017.

In fact, a protest campaign launched in 2013 by the student group Women In Design at the Harvard Graduate School of Design in support of the architect Denise Scott Brown, wanted her contributions to architecture to be recognised jointly with those of her husband Robert Venturi, with whom she shared a studio and projects to the full, and who won the Pritzker in 1991 by himself. [1] Later, the campaign was extended to Lu Wenyu, founder of Amateur Architecture Studio together with Wang Shu, who was also excluded from the Prize, which was awarded solely to her husband in 2012. Perhaps, the list of winners of the “Nobel for Architecture” is just one example of invisibility of women in this sector, which consequently means a lack of benchmarks and role models for professionals. But is this true? Where are women in architecture?

It can be clearly stated that architecture has traditionally been considered a typically male profession, perhaps because of its link with the physical work of construction. Moreover, history has silenced the role of women in the sector, even when they have had a significant role as partners of well-known architects. To mention just two examples, we must highlight the lack of recognition of figures such as Aino Marsio and Elsa Kaisa-Makiniemi, partners and wives of Alvar Aalto, and the authorship of the work undertaken by Lilly Reich along with Ludwig Mies van der Rohe, prior to his phase in the United States.

However, today we advocate projecting a positive vision of the future of women in this field, based on real data regarding the profession that could augur a change in this trend.

According to the most recent biannual study published in 2016 by the Architects’ Council of Europe [2] in Spain there were 53,800 architects, with a proportion of 72% male architects compared to 28% female architects. However, there are some European countries that are beginning to reverse this imbalance. It is the case of Croatia, which already has 59% female compared to 41% male architects, or that of Finland, where the proportion by gender is almost equal, with 53% females and 47% males.

This European panorama is also reflected in the data provided by the ATLAS of Contemporary European Architecture, published in 2015 by the Mies van der Rohe Foundation, an institution run by the architect Anna Ramos, part of the analysis of the 2881 works nominated for the European Union Prize for Contemporary Architecture – Mies van der Rohe Prize (EU Mies Award) since 1988. ATLAS shows that 42% of studies with finalist works have a male director, compared to 17% which are directed by men and women. Zaha Hadid Architects stands out as the only study headed by a woman to win the EU Mies Award, and Grafton architects as the only one led by two women with a finalist work. [3]

“Architecture is a man’s world”, states Benedetta Tagliabue in an interview in La Vanguardia on 9 March. [4] And it is true that it will take many years for the presence of women to be consolidated within the construction professions. For example, the number of female electricians or masons is still very low compared with the number of men, with only 6.7% of women in specialised construction fields. However, in jobs that require a high level of training, the female presence is greater: in construction, the percentage of women accounts for 8% and, in civil engineering, this reaches up to 10.4%, according to the 2016 Report on the Role of construction in the economic growth of the CES. [5]

In the Spanish university field, according to data from Ministry of Education, Culture and Sports, there were more female than male (54.45%) students enrolled on degree courses at Spanish universities in 2017. This situation differs substantially depending on the field, and in the case of Engineering and Architecture the proportion drops to 23% percentage of women. [6]. It is pertinent to note the comment of the architect and promoter of the platform “One day an architect” Zaida Muxí, in an article published on 8 March to be precise: “Female architects are under-represented as professors at universities. This low representation negatively influences the professional role models that women encounter in the classroom” [7]. And, of the 33 architecture departments in Spain, only two have a female architect head and, throughout the country, out of a total of 150, there are only 3 female professors of architectural projects and only one female professor of urban development. [8].

Beyond the statistical data, some women are making a mark 2018, with a prominent presence in the most important events in the sector.

The XVI International Architecture Exhibition of 2018 commences on May 26 – Biennale di Venezia, and this year has as its commissars and directors Yvonne Farrell and Shelley McNamara, Directors of the Grafton Architects studio founded in 1977 in Dublin.

At the prestigious DAM museum – Deutsches Architekturmuseum Frankfurt “Frau Architekt” has just closed, a fascinating exhibition which selected 22 women who have substantially influenced architecture since 1900 in Germany, and within the framework of which the “Joan of Arc” symposium was held, at which 11 outstanding architects were invited to participate [9].

In the national arena of female architects and professionals most recognised for their work, the month of March also brought us the announcement by The Architectural Association (AA) of the selection of the Spanish architect Eva Franch i Gilaber as its new director. The Committee elected her with a majority of 67%, the highest proportion of the vote received in an election since 1990.

This year’s edition of the Australian MPavilion pavilion, commissioned by the Naomi Milgrom Foundation, will be designed by a woman, Carme Pinós, making this the first public project by a Spanish architect in Australia.

The Barcelona Building Construmat exhibition (BBConstrumat), directed by the architect Ione Ruete, has also received awards that help to promote visibility of the work of women in the sector. Likewise, last November Ana Vallés, who chairs the BBConstrumat committee and the Sorigué group of companies, received the International Women’s Entrepreneurial Challenge Award (IWEC). This recognises leading women entrepreneurs around the world who have been most successful in their contributions to the development of the 21st century global economy.

It is fair to point out that some professionals find it uncomfortable to be included in such gender lists. This is the case of the Danish architect Dorte Mandrup, who, after being mentioned in Dezeen’s list of “50 inspirational female architects and designers” declared, “I am not a female architect, I am an architect”. [10].

Within the construction sector we cannot fail to mention the real estate sector, in which more and more women are achieving positions of responsibility. To name just a few significant women we must highlight Concha Osácar, advisor of the Hispania socimi and partner Director of Azora; Sandra Daza, General Director of the Gesvalt appraisal company specialising in consultancy and valuation, and member of the Board of Directors of Wires. Wires, acronym for Women In Real Estate, is a non-profit association which seeks to promote the presence of women in the real estate sector and serves as a platform and meeting point. [11].

Finally, we must mention Anna Gener, who is currently President and CEO of Savills Aguirre Newman Barcelona, and who from 2007 to 2017 served as General Director of Aguirre Newman Barcelona. In a recent interview with the digital El Nacional.cat Anna Gener pointed out: “The fact that there are more women in decision-making areas will allow us to change the company and society models that exist today. We are neither better nor worse, but we have different ways of doing things” [12].

Finally we must highlight some recent news for women in this field published on 16 March. A group of Spanish architects, which has been working for years on the gender perspective in architecture and urban planning, has registered the statutes and the Board of Directors of the Association of Women Architects of Spain (AMAE). AMAE is chaired by Inés Sánchez de Madariaga, Director of the UNESCO Chair of Gender at the School of Architecture of the Polytechnic University of Madrid (ETSAM-UPM) and gender consultant of the new executive committee of UN-Habitat. At AMAE Martha Thorne is Executive Director of the Pritzker Prize and Dean of IE School of Architecture and Design, as Vice President of the entity. AMAE believe that creating an association like this is necessary to “show the world what female Spanish architects are capable of”. [13].

The status of female architectural and construction professionals deserves more space. There are other names that we could cite, as well as many initiatives that are being carried out on the role of women in the profession and which also deal with aspects related to conciliation, maternity or the wage gap. International Working Women’s Day is just another premise to reflect on a situation that is, in fact, a daily reality.