Any economic sector which – whether it realises it or not – has a social component sooner or later generates a debate on the nature of its occupation. And the recent crisis has carved out sufficient space in the agendas of many people to feed that debate. It is often the case that when a busy professional has the time to think about aspects of his or her trade that are usually obscured by everyday tasks, we find that other people, who society has given the time to think and rise above everyday considerations, have been able to produce more than enough material to give more depth and meaning to these reflections. This material, which these people who we usually call artists, philosophers or writers have managed to capture in a more or less cryptic form, tends to be a good starting point. 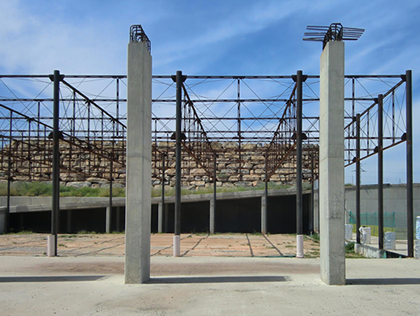 Most of the debates currently underway in the world of construction concern the nature of words. This is hardly surprising: we think with them. So bringing up a writer here is not entirely absurd. David Foster Wallace, in his essay E Unibus Pluram: Television and U.S. Fiction (1), talks about a debate on the topicality of literary work produced in an advanced literature class in a university on the East Coast of the USA at some point during the second half of the 1980s. The teacher, a prestigious writer whose name is not given, was set on engendering the most universal and timeless literature possible, eschewing any contextualisation that served to date it such as elements that have always been current in our lifetimes and foreseeably will always be so: cars, telephones, televisions; the elements that make up the everyday landscape of American society. The students quickly responded that this choice was circumstantial, and that these elements portray the current epoch and no other. That they cannot be universal. When the teacher upheld his position, the students concentrated on opening up the time perspective until one of them asks what the position of literature with a universal and timeless vocation would be towards the continental drift. 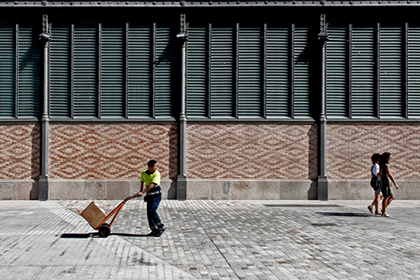 The world of construction is currently engaged in a similar kind of reflection. The pre-crisis wave generated a paradigm that is barely beginning to break, in which a series of conventional solutions on every level and scale (from the conception through to the finish of structures) became standardised as a means of resolving almost every existing construction, without anyone stopping to think too much about whether or not they were the most suitable option: the economic cycle overruled all and they had to be used. And as Orwell forecast in 1984, it seems that this has always been the case. The past has been remade to fit in with this theory, legitimised as if things could not possibly work in any other way. The flexibility of construction methods was not a factor for consideration a priori from the time when the dynamics (and the market itself) generated by the work were just as, if not more, important in economic terms than the rest of the elements involved in generating a project.

Introducing this flexibility into the management of a new-build project (2) might lead to results such as turning a work that is too expensive to be completed in accordance with the terms by which it was originally planned into a museum that activates and recycles its surroundings with porous boundaries, transforming it into a genuine urban proposition in the shape of a square metre module several times smaller than the original building, this being the case of the Lleida Climate Museum (3), designed by Toni Gironès, or reducing the price of housing very much below the conventional model, such as the La Borda housing cooperative. At present there are companies on the market capable of turning the support structure of plasterboard panels that form the layout of an apartment block into the weight-bearing structure of the whole, legitimising along the way solutions for the façade (such as dry ventilated façades using smaller or larger pieces of the format in different materials) which in other construction systems are just an option that might be ruled out quite easily: flexibility, when it comes to tackling a project, is a factor independent of the project’s nature.

This boundary is, in fact, diffuse, porous and newly-created. It is just as easy to consolidate it as it is to absorb it and consider, analysing almost all the previous epochs of history, that it does not nor ever has existed. Any new-build work, once delivered, becomes part of the past and has the capacity to integrate, to a greater or lesser extent, and to generate more or less city and urban structure. It becomes a generator of experiences and stories and a source of anecdotes. Its eventual architectural quality is what will turn it into an object worthy of being preserved or valued to a particular degree (4).

We start talking about renovation when the building in question has some form of value worth preserving and, therefore, conservationist criteria enter into this preservation which may, or not, make sense. This type of renovation work even provides a margin for architectural projects of great value, as demonstrated by the London team of Caruso St. John when they intervened in a setting as sensitive, delicate and with as many connotations as Sir John Soane’s Museum, where carefully-designed furniture needed to be seamlessly absorbed in three new exhibition spaces (5) that had previously been closed to visitors: this is where conservationist and archaeological rehabilitation aligns with the purest of signature architecture. Other practices such as that of Richard Rogers (the Holly Frindle bungalow by Berthold Lubetkin, an interesting case as it affects rationalist heritage (6) or Herzog & de Meuron (the Armory Club in New York (7)) have shown exactly the same approach.

These delicate yet extreme interventions are not generally the norm but rather the exception. Normally, the boundary between building renovation and new-build is more porous and difficult to articulate. It usually translates into a sensitivity towards what exists (context, built surroundings, materials) which hugely enriches projects that might be new and completely decontextualized from history: the renovation, therefore, can be an option that informs and enriches new-build projects.

The first of these is the new public space that Vora Arquitectura built to highlight the milieu of a work that also straddles the boundary of what is building renovation and what is not: the transformation of the Borne Market in Barcelona as a memorial (8). This public space was a brand new construction which essentially flattened the surrounding area of the market and turned it into an esplanade which, depending on the proportions of the urban envelope, might become a street, s square or a kind of hybrid between the two. It is a public space that has no historical precedent in this spot; something new, designed from scratch. This space is activated by the outline of the layout of the streets in the La Ribera neighbourhood; a layout which continues within the market itself. The design was made using the paving stones already in situ, recycling them and infusing them with new life and a new texture by means of the simple recourse of relaying them the other way round: Vora Arquitectura gave itself the luxury of using history with sufficient sensitivity to set the timer of this location’s history back to zero so that it will become venerable through its own ageing process.

The second example is a natural space: the environmental rehabilitation of the banks of the River Llobregat (9), by the Batlle i Roig architectural practice. The rehabilitation in question was a bold and even aggressive one in terms of the initial condition of a denatured river that had been turned into an abandoned water course choked with rampant circumstantial vegetation that had little to do with the native vegetation: invasive plants resulting from a thousand different tales of colonising the basin of the River Llobregat through the imposition of a thousand overlapping civil works that the water course had always managed to hinder.

In this case, rehabilitation meant moving forwards while looking back. The wandering course of the river was recovered, though not in its original meandering shape but one which the architects negotiated with its circumstances and the various environmental experts who advised them. The course of the river was not recreated nor aspires to be anything other than what it is: a Mediterranean river with a relatively small flow, though offering tremendous biological potential, which at the same time had to be negotiated according to the particular circumstances of every section: allotments (artificial), invasive vegetation that was difficult to eradicate (river reeds), existing metropolitan infrastructures, etc.

Today, the area has become the most important urban space in the municipalities it crosses, almost a sub-county in itself: a place of relationships, a tremendously important biological corridor for the Metropolitan Area of Barcelona and, in the future, an important generator of the clean economy: food and energy. In this case, the rehabilitation has meant recreating, in the literal sense of the word (recreate: create once again), something very similar to what existed centuries ago and adapting it to its new circumstances. Fearlessly. Rehabilitating, in this case, has been an act of bravery, not conservationist at all. An attitude that is perfectly transposable to other kinds of interventions and projects, not just in public spaces but in buildings on every scale.

The absence of adjectives in the world of construction and the new sensibility that this can arouse could lead all the stakeholders involved (architects, technicians and companies) to a more flexible and rich organisational structure which, in itself, could constitute an important market niche: not so dependent upon the end product but on the process, on an attitude, on a way of doing things. On a sensibility. And this is impossible to replicate.

(1) From the book A Supposedly Fun Thing I’ll Never Do Again, published by DeBolsillo.

(2) Remembering Foster Wallace: seen in sufficient perspective, nothing is new build. Nothing can be new. Always the same atoms.

(3) Link to the project: http://www.tonigirones.com/ca/clima

(4) (1) Once again, this boundary is tremendously diffuse. Often, for this to happen, it only needs for a building to stand for a certain time, or for it to become unique for whatever reason: a whole neighbourhood of post-war houses may have no value but the last building that survives an integral renovation of this same neighbourhood will almost certainly be valuable.

(5) Link to the project: http://www.carusostjohn.com/projects/sir-john-soanes-museum/

(7) Link to the project: http://www.archdaily.com/176436/park-avenue-armory-herzog-and-de-meuron

(8) Link to the project: http://www.vora.cat/ca/projecte/entorns-mercat-del-born

(9) Link to the project: http://www.batlleiroig.com/landscape/recuperacio-mediambiental-dels-marges-del-llobregat/