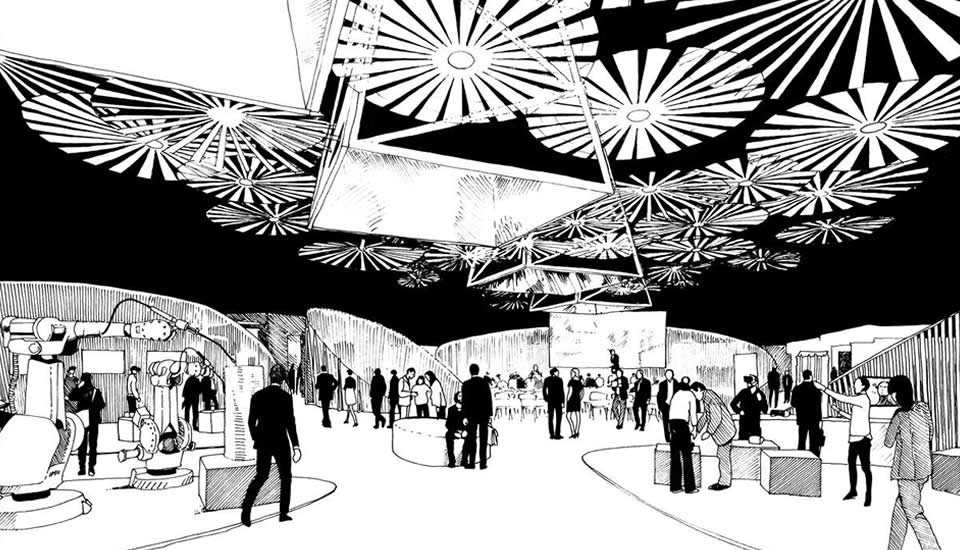 The fundamental invention that structured the way Classical Greece functioned was a concept capable of shaping a structure of thought, of regulating a city, of visualising the concept of democracy. Of dynamising the function of human thought and its zenith: philosophy. An invention at the root of the concept of citizenship itself.

That invention was the agora

The original agora was not strictly speaking a square. The original agora was a space. It was a reservation; a place created as a result of people’s activity, of their coming together and conversing in groups of variable sizes; sometimes smaller, sometimes bigger. The agora is a space that is capable of establishing a dialogue, a class, a debate or a parliament. A celebration. The agora, therefore, is neither a form (it is often an area of wasteland) nor a typology: it is a place where things happen, a meeting place, a place of creativity, of knowledge exchange and transfer. It is the civic centre par excellence.

It is no surprise, then, that the physical centre of the venue at which the Barcelona Building Construmat will be held this year has been formalised as an empty space: a civic space as its focal point. It will be a space such as that described above for meeting, creating, and for exchanging and transferring knowledge. The central space of this year’s BB Construmat will be an agora.

EConstruction is one of Man’s most ancient industries; an industry by which human beings have been culturally defined since before they began to settle in more or less permanent sedentary nuclei: a fact illustrated by the megalithic monuments.

And it is an industry that, for various reasons, has seen little evolution since. Let’s face it: the construction sector is in such a deep state of crisis that it has led to a structural efficiency deficit of 50% to 60%. Permanent(2). Macroeconomic data does not lie. Currently the global economy is growing by 2.8% per year. The companies in the sectors that have been able to transform (commerce, the components industry, among others) are growing by an average of 3.6% per year. Growth in the construction sector is just 1%.

The construction sector, therefore, is in need of urgent, comprehensive and global reform.

The reasons that have delayed this transformation are deep-seated, global and somewhat depressing: essentially the sector, unstructured, obsolete and inefficient, works. It works because it has to work. It works because it is a necessary sector that provides our civilisation with its hardware: homes, infrastructure and workplaces. It works and, working by hook or by crook, manages a huge amount of money. Astronomical. An amount of money that results in inertia within the sector that is both vast and hugely influential. The system currently operates with a stability similar to that of a bicycle: it operates because it is in motion; it operates because its precarious balance keeps it running in an endless loop. It operates because it is self-balancing. But any change, jolt or slight external interference could potentially bring it down.

The sector is handicapped by the very complexity of its operation: particularly by its regulation and level of atomisation and the unique problems the land ownership structure presents in terms of sites. The management of this needs to be fundamentally political both in terms of simplifying, streamlining and updating the legislative framework and, more sensitively, in the management of land ownership and, ultimately, what is being built on or occupies the land.

This high level of resistance within the sector, this difficulty with moving forward has prevented its transformation. Or at least prevented it from happening quickly enough. The technological presence is circumstantial, motivated by a need for control and large scale adaptation. Overall, the sector has neither undergone transformation nor come to terms with its enormous potential for development.

However, society, both because of the growing complexity of industry demands and the need for global economies to be increasingly circular, clean and sustainable in a global scenario where people are moving from rural areas to increasingly ubiquitous, powerful and unmanageable mega-cities, is demanding a change that needs to be more than an umpteenth adaptation capable of keeping the bicycle upright: society is demanding a paradigm shift.

The sectors of the global economy that have undergone transformation (commerce and technology, among others) possess an encouraging common feature: transformation has always come from within.

Both the construction sector globally and many of the companies, large or small, that make up its framework (3) possess sufficient potential to face this transformation on their own. Never mind what could happen if we were to combine our efforts through the exchange of opinions and knowledge. The transformation potential that various companies possess, and that many of them have already begun to capitalise on, is scalable: there is the scope and the will to turn it into a political factor, both at a global and local level.

Focus on the process

The key to the sector’s transformation is in its ceasing to focus purely on the final objective. It is essential to monitor, safeguard and plan in relation to the process. The process is the integrating factor for the stakeholders. It reduces, or optimises, costs, which ends up being the same thing. It reduces delivery times and is even more flexible and better able to respond to demand. The process spans the creation of any product, from a component to an entire building. The process, of course, follows the project, when there is much to say and do.

This process of transformation requires the use of technology and the consequent training and recycling of the agents involved. The process requires transparency and a willingness for international cooperation, as well as a great deal of research, both to vertically integrate mining, materials treatment, transport and installation companies, and in terms of questioning what should and should not be used in the construction. And, of course, the introduction of large-scale recycling and reuse.

The use of BIM, the use of semi-components and standardisation are other key factors.

Inefficiency corresponds to waste, and that is something that is starting to seriously affect our environment. The construction sector is responsible for 50% of the planet’s solid waste and more than 30% of energy expenditure. A sustainable approach needs to be more than cosmetic and cannot be addressed through individual projects. It has to be global, vertical and political. The sector’s sustainability and that of the products and infrastructure it creates are key to our survival.

And it must not be seen as a mere afterthought: sustainability has huge potential for transformation in our built environment: waste that is transformed into a variety of components, buildings or building layers with a useful life that needs to aim to be cyclical. Reuse and restoration viewed in such a broad sense that it even leads to the inclusion of those buildings or parts of a city that need to be demolished and rebuilt(4). Energy that, having fulfilled one function, performs another, and so on until exhausted (heat pump returns that heat or cool water, etc.). Water that leaves buildings or cities cleaner than it went in. Efficiency that changes the look of our built environment. Without the use of the word ‘adaptation’: but rather ‘benefit’. Or ‘symbiosis’. Or ‘resonance’. The recent award of the Pritzker Prize to RCR Arquitectes can be viewed as a step in that direction.

What about the architects?

I have left one of the main factors distorting industry operations to the end and it is that most closely linked with architecture and architects, one of the arts and one of the factors most directly involved in the process: the complexity of the project.

Ideally there is a project for every place and every client. And nothing that has been said previously affects that. The key lies, once again, in the process: in the integration as part of the project, from the very beginning, of all the factors capable of boosting it. In the incorporation of the same management tools mentioned above (fundamentally BIM), in the rational use of technology and in continuous recycling.

The architectural derivative involves the debate on skills: not to maintain, but to recover and to expand. To plan is, also, to integrate the whole process vertically, even outside the bounds of the project. We architects have to rediscover skills in the areas of planning, management of structures, of materials, of research into components applied to a specific project. The political management of the project also needs to help, taking into account that the law on contracting does not allow for a project to be developed and built as an integrated part of the whole process.

The agora is the place where all this is built: a place of process exchange, of targeted discussions that brings the construction sector right up to date, enables it to roll up its sleeves and resolutely start working in this direction. Networking; business associations; clusters, including, when possible, their integration into a project team able to submit a tender in the same team of architects; exchanges of opinion on the research processes; or, simply, debates on exchanges of experiences and product demonstrations are the factors on which the next Barcelona Building Construmat event will be based.

The central space will be a hub of ongoing activities, debates and conferences that will turn the event into that centre of knowledge transfer, that place where we continue to form the alliances we all need. The result can only be positive.

(1) Of res publica: of the republic, in short, if we adhere to the literal sense of the words.

(2) As can be seen from the careful reading of two different reports: that delivered by the McKinsey Global Institute a few days ago, a result of a study conducted by eight independent experts from six different countries; and a World Economic Forum study conducted late last year with a consultancy made up of 19 of the sector’s leading companies and 20 different experts from all the industry’s subsectors: academic, advisory, executive and business.

(3) The most atomised scenario of any other sector in the global economy, in fact: another destabilising factor.

(4) An example: the Ronchamp church, by Le Corbusier, can be viewed as a restoration, or reuse, of the church that previously stood on the same site and was destroyed in World War II. The architect built his acclaimed work using the materials recovered from the previous church, without a single kilo of the ruins being removed from the site.