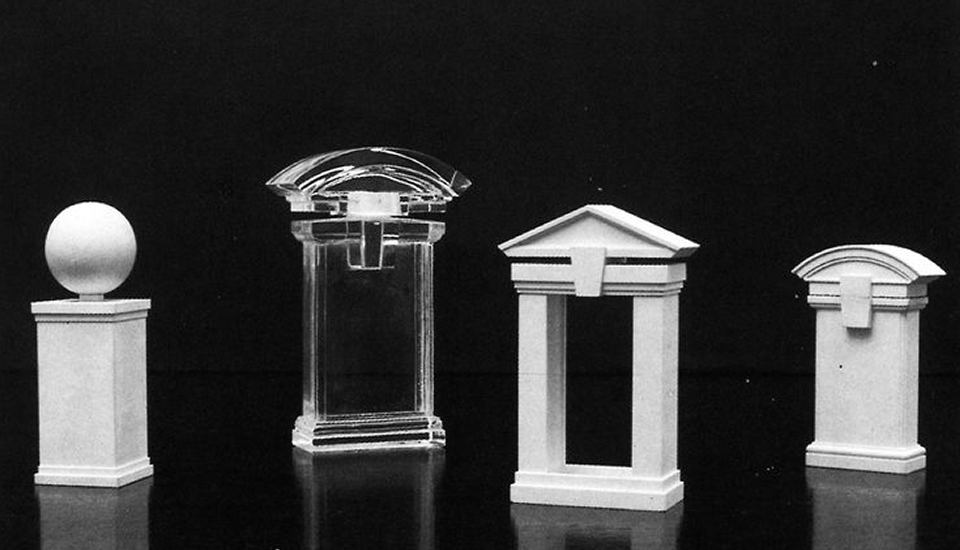 These relationships, therefore, work regardless of whether we are dealing with a whole city or small objects(1): everything can be conceived as architecture in a game that confounds scales, that replicates the ways of operating independently of any attribute or adjective: measure, function, material. A huge variety of cases of different architects, styles and periods communicate an attitude that can be extrapolated to the entire profession. Let’s take a look at some of these cases:

The attributes of architecture: perfume bottles on an urban scale.

Ricardo Bofill is one of the preferred architects of the House of Dior, for which he has designed various buildings and objects over the past four decades. When, in the early 1980s, Marc Bohan, at that time the brand’s fashion director(2), decided to broaden their market with a range of perfumes, he commissioned the architect to design their bottles. Bofill would come up with a collection of little bottles that emerged directly from the formal universe of the vast urban interventions he was working on at that time, most notably in the Marne-la-Vallée district. The crests of the buildings, the freestanding gateways, the airy columns that supported them, now transferred on a smaller scale using the same series of elements, like balusters, would become the elements that would give the perfumes life, character and prestige: from social housing intended to provide the middle classes with a decent life(3) to luxury objects employing the simple resource of using the same forms with different measurements and materials. These materials, incidentally, were certainly not expensive: the bottle is not the treasure on offer but rather the liquid it contains. And that is why it could be resolved easily with a common material.

The relationship with place: ugly chairs and closed shipyards.

When Jean Nouvel was working on the Philharmonie de Paris which could be easily set up and removed from the rooms it was used in and would eventually be patented and sold as a piece of furniture independent of the project that originated it for use in other multipurpose spaces.

Nouvel designed the chair in exactly the same spirit as he used for many of his urban buildings, such as the (portable chair (the Oxymore) which could be easily set up and removed from the rooms it was used in and would eventually be patented and sold as a piece of furniture independent of the project that originated it for use in other multipurpose spaces.

Nouvel designed the chair in exactly the same spirit as he used for many of his urban buildings, such as the Onyx auditorium (a dense cube of almost industrial waste, floating in the middle of a car park), the social housing in Saint-Ouen and Nimes, with their look of an occupied industrial warehouse, or his proposal for the Conference Centre in La Coruña, a building that aims to blend in with the stacked containers in the huge port area next to the facility(4). These buildings make a game of their ugliness. Or rather, they transcend ugliness: the interior spaces are designed with so much luxury(5), in such dichotomy to their completely deconstructed surroundings or so far removed from the project that they cannot, either now or for many years to come, be aligned with the new proposed functions, which need to set themselves against these exteriors. Thus the façades aspire to confuse, to mimic their environments (and when their surroundings improve, to serve as a reminder and a homage to what was once there thanks to the quality of their composition) while sheltering the interiors as if they were their own private secret.

In the case of the chair, it is presented to us as an object. An object pure and simple: vertical, squared-off, straight and inhospitable bars and cushions. Uncomfortable. Yet the eyes deceive: you look at the chair and almost reject it as a poor design.

Yet when you sit in it, the physical sensation of comfort, even pleasure, contradicts what your eyes tell you: the chair moulds perfectly to the human body, accommodating it, curving slightly into it and with this little gesture this uncomfortable-looking object, almost a sculpture or the idea of a chair than a chair itself, is transformed into a hugely comfortable armchair in which to spend hours seated happily: Nouvel created a piece of furniture that changed the character of the place when it is not occupied into an operation very similar to the urban interventions of Max Bill. It is even immediately indebted to these interventions.

Charles Rennie Mackintosh would do the same with his memory of Glasgow, his home city. For the previous generation to that of the architect, Glasgow was Great Britain’s second city. Its economy was based on its immensely prolific shipyards which at one point managed to produce almost one-third of all the high tonnage vessels plying the oceans of the world. The collapse of this monstrous industry left a multitude of hugely skilled carpenters and cabinetmakers on the dole. These were the workmen who Mackintosh contracted to make his furniture – exceptionally complex furniture, some of which, like the cashier’s chair in the Willow Tearooms , are made from more than two thousand pieces enmeshed with a precision that approached tenths of a millimetre: the memory of that shipbuilding Glasgow was concentrated in a few pieces of furniture of such quality that today they can only be commercialized in the most simplified and rough versions.

The relationship with the object: the structure of champagne corks.

Herzog & de Meuron worked during a certain period for the Swiss railway company. The most famous of all their interventions was the Signal Box 4, a building with a certain volume and four or five stories high located in the midst of a huge network of tracks in Basel. The building took advantage of one of its primary functions (i.e. protecting the electrical appliances inside it from the magnetic fields generated by the whole mass of catenary surrounding it) as a means of expression: a series of copper strips completely envelop the building, creating a kind of Faraday cage. The strips open slightly, pivoting on their supports, wherever natural light needs to be let in. And there you have the building: a mute box, with no other type of classical order, no base, no crest, no floor division. An object pure and simple that plays admirably with its context, both rallying it and soothing it.

The resource of a pure object has been used by the same firm in creating some of its most celebrated furniture, such as a cork stool which is, in fact, the cork of a champagne bottle fifty or sixty centimetres high. Just a cork: a solid volume, weighty, comfortable and slightly ambiguous. The same resource that allows them to turn a pure and simple industrial building into an urban landmark also serves for a piece of furniture, or a series of units, capable of characterizing a neutral room and turning it into a bar, a meeting room or whatever the project requires.

José Antonio Coderch and industrialist Llambí patented a series of standardisable blinds that could be adapted to the designs used for their housing blocks. In the early 1950s, when the relationship between the industrialist and the architect was still in its infancy and both of them were searching for that universal model that would bring them an income, they took one of those models and adapted it to have a structural function in a particular building: the group of fishermen’s houses in the Barceloneta district that are still there today, still in a good state of repair, on Paseo Almirante Cervera. This building, which was built with very limited resources, has a considerable overhang over the street, which today does not present any problems if you make it with concrete slabs, but put a very critical stress on those slabs of just over twenty centimetres made from thin-edged beams, executed without a compression layer. Coderch, knowing full well that each of those slabs would be weakened by the overhang, connected the whole through the blinds. The wooden surrounds were replaced by steel tubes anchored directly into the concrete slab which, by virtue of their small cross-section (little more than the section of a louvre blind, lest we forget) were able to buckle and perform a different function. Thus they took on the stress thanks to the louvres of the blinds. It worked so well that they were actually built twice: a provisional one on site, with wooden louvres affixed by the pressure of the assembly, and the second definitive version when the standard pivoting louvres arrived and replaced the provisional ones one by one; doing the whole thing at the same time could have destabilized a whole, but generated and acquired its stability by virtue of the unusual use of an element from pure interior design.

The quintessence of the absence of scale: office drinks cabinets.

Eduardo Souto de Moura and Luis Ferreira Alves took sixteen years, between 1991 and 2007, to complete their Torre O Burgo in Oporto. The building, a small formalized tower following the classic schema for tall building with an inner core and a weight-bearing façade, plays very subtly with the façade as the main form of expression, making it an element in the double play of steering the tower almost as if it were an extrusion of a building between party walls, with two very blind side façades and two almost entirely glazed main ones, and turning the building into a scale-less object with a gesture almost as authoritarian as the copper bands around the signal box in Basel, all thanks to the idea of wrapping each floor with three horizontal strips of glass which, when the façade turns, are transformed into three opaque bands while the structure that separates them becomes transparent.

For many years the tower spent its early life as a model, a very special model: a drinks cabinet. Apart from being a private joke, the drinks cabinet’s very function influenced the most important aspect of the intervention: the value of the building as an object, a characteristic that is evident thanks to the versatility of a composition without scale. Or material.

It is the market that makes architects specialize, and it is the specific features of certain commissions, of adapting to regulations that are often absurd or directly Kafkaesque, that creates specific tools and professional niches that appear too much like watertight compartments, not the art or trade of architecture, which in fact is due to consistency in a way of doing and thinking that transcends these specific ways of practising and which will always rise above them. This should not be forgotten by those who have the ideas (who often progress thanks to a certain level of unconsciousness or even ignorance, of disaffection towards the daily mechanisms of specialization) nor those who have the technical solvency necessary to move them forward.

(1) This is where those little ‘in’ jokes of many architects start, who do not seem to be able to exist as such if their large-scale projects, not to mention their urban-scale ones, do not also involve the design of a handle of a door, or a fork. Which shouldn’t make sense, really..

(2) Bohan was, in fact, the brains behind the Dior empire and the man who would give the brand its solid business structure, backed up by the prestige of fashion designers such as Christian Dior himself and his brilliant disciple Yves Saint Laurent.

(3) Filmmaker Terry Gilliam would consolidate his ‘solo’ career (after leaving Monty Python) with Brazil, an outstanding dystopic film that was shot in Bofill’s buildings in Marne-la-Vallée, transforming the dream of the middle classes into a totalitarian nightmare. It was premiered in 1985, two years after the launch of the first collection of perfume bottles by Dior.

(4) Curiously, the tender for this conference centre was won, and built, by none other than Ricardo Bofill, in partnership on this occasion with César Portela.