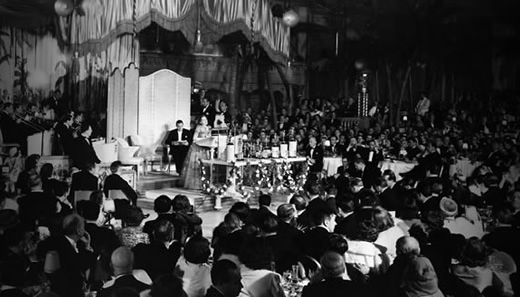 We are all familiar with the Nobel Prizes, awarded annually to the scientific and cultural elites of the planet; prizes which should serve as the entourage, the moral legitimation and the logistical support for the award which should be (and in theory is) the acme of them all, the one which really matters: the Nobel Peace Prize. The Nobel Prize is synonymous with prestige. Indeed, it is the prize that everyone would aspire to win over any other. It is the paradigm of prizes.

There is one exception, however: the prize of the academy that controls the world’s dream factory: cinema. I refer, of course, to the Oscars. Everything about them is myth and legend, starting with the name itself, which originated from a casual remark by the secretary of the awards, Margaret Herrick, in 1931, who found that the statue was the spitting image of her uncle Oscar(2): in truth, the official name of the awards was, and is, the Academy Awards. A much less glamorous name, it has to be said. The Oscars are the paradigm of the universalisation of a specific event: an association rewarding itself and ending up organising what is perhaps the only ceremony I know of that is capable of competing in popularity with the Nobel Prizes. Or even surpassing them.

Architecture is a profession which, with its combination of art and technology, its ability to embrace a complete cosmogony, has all the ingredients to form the basis of a genuinely popular or truly prestigious award. The first has not yet happened. The second has, to some extent, but not entirely.

An architectural award is the recognition of the merits of part of the profession or a particular architect that the organising body is in the mood to judge and considers to be relevant and exemplary. An award is, in the first instance, a portrayal of the promoter of the prize: a list of its tastes. A list which, in order to enjoy a minimum of prestige, must be drawn up following certain conventions, the most important of which is the appointment of a jury. The jury is the guarantee of technical competence, of knowledge, prestige and, above all, independence.

An award is, essentially, a huge communications campaign: it communicates good taste, prestige. The prestige of a promoter who wants to distinguish themselves and make themselves known within the world of culture. The communication campaign tends to end almost always in a solemn and relatively glamorous ceremony.

If we examine this carefully and give it a second’s thought, we will quickly discover that a prize, any prize, whether a Nobel or an Oscar, is above all a project. A positioning project. A communication project. The project of a legacy. The project of a perspective which, through an accumulation of awards, category after category, year after year, will accurately portray and communicate, like nothing else, exactly what that institution or brand aspires to be. Post-ceremony management will be key to this project: a scholarship or a monetary award for research or product development can provide just as direct a return as the rest of the process.

Architectural awards have been fluctuating between the glamour of the Oscars and the prestige of the Nobel Prize without ever entirely achieving either attribute: they are often interesting though almost entirely unknown prizes, and big ceremonies are all about smoke and mirrors. Consistency, continuity, meticulous work and audacity can give recognition to recognition (that precious, sought-after treasure). And with a bit of luck the scandals behind the scenes will generate the necessary mythology. And there’s no shortage of those!

(1) Take a look at the mining industry which, seen in perspective, has been one of the most decisive sectors in the progress of history of the last three hundred years. The Industrial Revolution did not start with the textile industry but with opencast mining, which was behind the development of the steam engine. Dynamite (with the trading name of TNO or Trinitrotoluene) is essentially stabilised nitroglycerin: easy to manufacture, handle and transport.

(2) I don’t know if there is a photo anywhere of the Uncle Oscar in question so I’ve never been able to ascertain if the similarity is real or not.