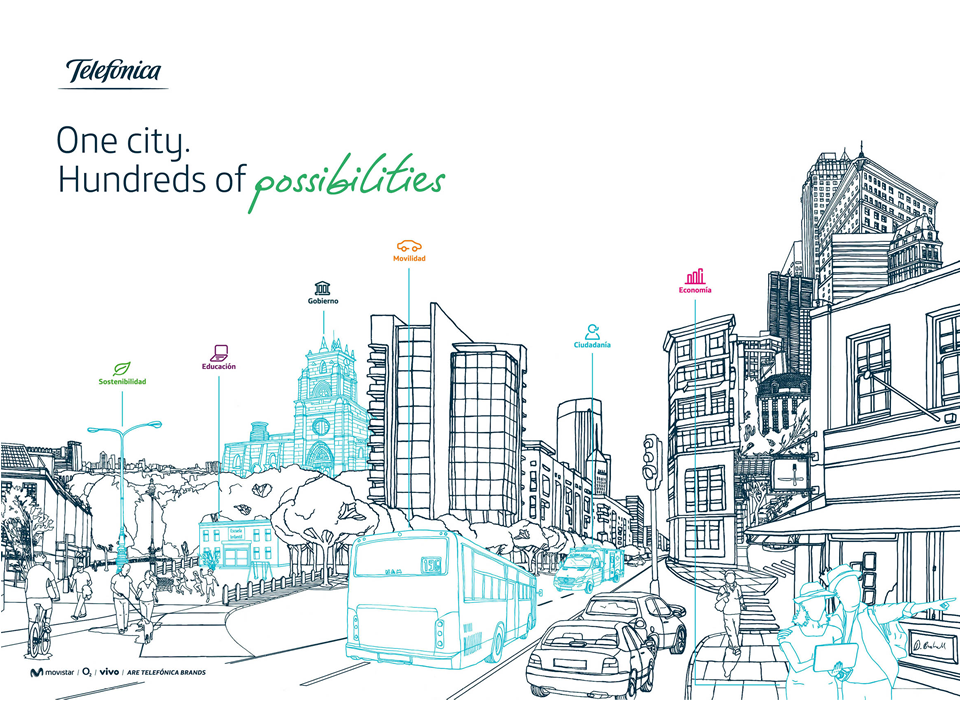 The cities in which we live, the urban reality that surrounds us, is not limited to the physical structures that support or contain us. The media city that Marshall McLuhan forewarned in the 1960s is the result, thanks to the internet, not only of the major official media groups but of what filters down into the citizenship as a whole. The Internet of Things (IoT) can be regarded as the materialization of these invisible networks. We live in a space constituted by information in which, as Keller Easterling says: the networks will shape the urban space itself. I talked about this with Rosalía Simón Navarro, smart city leader at Telefónica’s IoT department.

Nacho Martín – What is the IoT?

Rosalía Simón – The definition that we at Telefónica give to the Internet of Things is bringing people closer to the things that matter to them. In the same way that using a computer or a mobile phone changes when you add a data plan or fibre optic ADSL, because you’re bringing in a social component; imagine taking this concept to a much smaller computer and making it applicable to any kind of object that a person regards as important.

We talk about the Internet of Things in terms of three spaces: personal space, which includes the things closest to an individual, such as health, “wearables”, their car or their home; the local space in which people spend their time, such as the city, buildings and stores; and finally the spaces that are further away such as factories or agricultural land.

In each of these spaces, IoT technology can produce information that is relevant to that particular space. For example, a sensor can tell me what parking spaces are free in my neighbourhood. Connecting that sensor to the internet can thus help me find somewhere to park much more quickly. Therefore, the IoT has brought me something that “matters” to me in the context of the city. And what matters to each individual doesn’t just depend on who they are but on the space they are occupying at any given time.

NM – How will the IoT configure smart cities?

RS – The IoT lets us connect certain objects in the city such as urban furniture, street lighting, water meters, parking spaces, the irrigation of parks and gardens, waste containers… in general, passive objects that have not been connected up to now. What this achieves is to make city services more accessible and efficient: we’re able to park faster, use water more efficiently in parks, spend less on street lighting, etc.

In short, thanks to the IoT, the city space becomes filled with connected objects that help its residents to have a better living experience, on the one hand, and gives the public administration the ability to manage this space more efficiently, on the other.

NM – Cities were originally devised by philosophers; then they were designed by architects and urban planners… why does it make sense for the configuration of cities to be so technocentric now?

RS – I think we’re seeing the convergence of two trends: on the one hand, the intensive use of information technologies is permeating every single sector and space. And on the other, people are adapting to new technologies faster and faster, especially when the design of that technology is made more “accessible”, in other words, providing an increasingly user-friendly experience.

These two trends are expanding the use of technologies to the masses and ensuring they form an integral part of the long-term vision of cities, as in order to “connect” with their citizens they need to be on the same technological wavelength, and people today are already making intensive use of technology in their homes and offices.

NM – In terms of the average building, what are the most obvious transformations?

RS – Within a building, the IoT connects all the objects that are relevant to energy management (like lighting or central heating); security (such as access control or motion detectors); information (such as digital signage); and also water management (for example, for irrigation).

Thus the IoT lets us improve our level of “analytic maturity” in terms of efficient building management: instead of having a series of unrelated bits of information (like an electricity bill) we now have information on energy consumption by floors, and within each floor the areas that make greatest use of central heating or lighting.

NM – What headline would you like to see in the press about Smart Cities or the IoT and Telefónica in five years’ time?

RS – If it could be in the press in the next few days, I’d love to see a headline that the Spanish Government is committing to IoT technologies in every single area that matters to the Spanish people: households, cities, buildings, factories and the agricultural sector.

And about Telefónica in five years, it would be that we are an even more consolidated player in the IoT sphere.

NM – How will you measure the success of this objective?

RS – The objective way of measuring this would be by the percentage of connected objects (cars, lighting, electricity, water and gas meters, etc.). But I also think it’s very important that the people themselves recognise the benefits that IoT brings them in different areas (households, cities, etc.); that they adopt this transformation and do not consider it as an expense but rather as an investment, as a driver of growth for the city and a mechanism for making their city services more efficient.

NM – What are the three biggest challenges to implementing it?

RS – Going back to the cornerstones I mentioned earlier, the main challenge as far as I’m concerned is financing it. The smart city projects being undertaken in Spain are being financed to the tune of around 80% by FEDER funds, but there’s got to be some level of long-term sustainability.

The procurement model is another challenge; there has got to be some form of incentive; if the specifications don’t put a premium on the use of IoT technologies in private enterprise, they are not going to get awarded projects.

NM – In terms of agents or designers, what kind of roles are involved in IoT design?

RS – We can break the IoT down into various layers: the device, which involves both designers and manufacturers (or the parts of these devices); connectivity, whether this is cellular (2G, 3G, 4G) or long-distance radio frequency, Zigbee, etc., each of which has different properties for use with specific communications; the added-value apps layer, which is where software companies come in, and companies that have special knowledge of vertical services (for example, the management of energy efficiency); the layer of systems integrators, which are the companies that create end-to-end projects; and finally, the suppliers of IoT-based services.

NM – Is there an actual job description for an IoT designer or architect, and if so what skills do they need to have?

RS – Each of these layers will have different IoT design profiles. For example, in the device layer there is a role for the optimized design of hardware for the IoT according to the object to which the device is going to be connected (for example, if it will be connected to a vehicle or a water meter).

Meanwhile, there is also a need for architects with an end-to-end vision of IoT solutions, who also need to oversee aspects such as security.

NM – Why do you think there are so few urban designers or architects committed to this field in Spain?

RS – One of the things that is happening is that city councils are focusing on IoT projects for smart cities as special projects aimed at the systems/innovation/technology departments of the council, or at the departments that the IoT would most benefit, such as the environment.

NM – How does the IoT benefit the lives of the general public, or is there any way in which this kind of management architecture could harm us?

RS – The Internet of Things makes people’s lives easier or more convenient, such as knowing where the nearest available parking space is, or how much your city council is spending on rubbish collection; all this shared information means that people are aware of how the city’s resources are being managed.

NM – What kind of limits need to be put in place to ensure that this kind of sensor-heavy environment does not turn into something negative, or whether there will be a need for unconnected spaces?

RS – Discussions are currently ongoing about data privacy and how this should be implemented in the sphere of the Internet of Things: for example, who owns the data generated by a sensor? The city? The service provider? The citizens themselves?

On the other hand, we need to look very carefully at the matter of security in the Internet of Things, such as ensuring there cannot be an attack on the servers that control the systems of the meters of an electrical distributor. This means that the devices have got to be much more secure, at the point of manufacture. And it also implies that we need to analyse and securitize every point on the route travelled by the data gathered by each sensor.