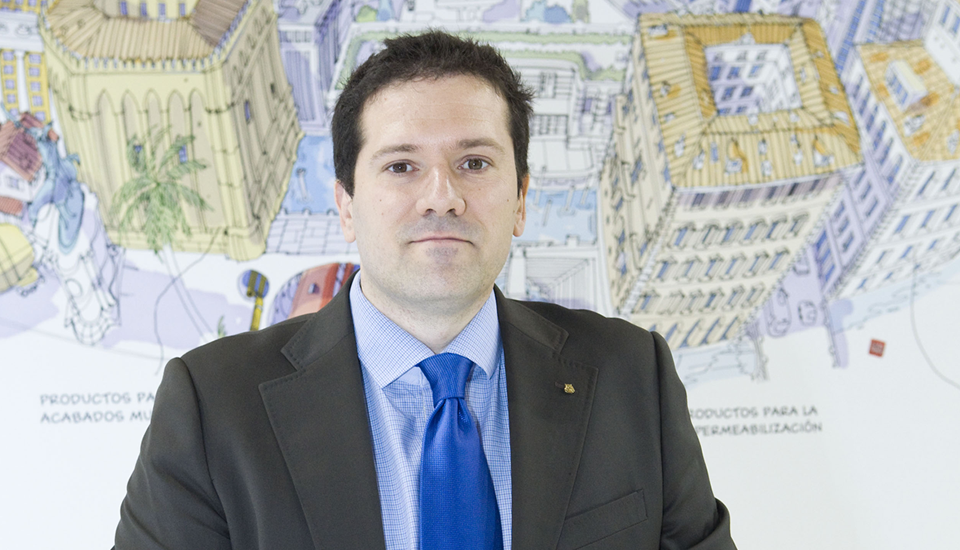 The legendary Italian company Mapei, which was founded in 1937, operates in Spain under the name of Mapei Spain. Mapei is the largest producer in the world of adhesives, sealants and chemical products for the building industry, with a portfolio of more than 1,600 products and an annual turnover of 2.4 billion euros. The company has almost 9,000 employees throughout the world, 12% of whom work in its 18 R&D centres.

Mapei has been operating in Spain since 1991, which means that your company must be fully aware of the reality of the Spanish construction sector. In this context, do you think the sector is emerging from the recession of recent years?

Jaume Remolà: Last year was a good year for the majority of players in the building sector. Refurbishment in particular is the driving stimulus, something we have needed for years: cranes can once again be seen in large cities and several projects that had been put on hold are now being resumed. When investment in public works and major infrastructures is revitalised, only then will we be able to say that we are leaving behind the trend of these past years once and for all.

Can you tell us in what way Mapei has been able to get through the bad times of the past?

J.R.: Last year we celebrated the 25th anniversary of the arrival of Mapei in Spain. During this time we have gone from being a company that was practically unknown in the country to one of the leading companies in the chemical sector for the building industry. At the beginning of the 1990s, Mapei was already a multinational, well-established throughout the world: in fact, this year we have notched up 80 years at a global level. We made a fairly timid entry into Spain but throughout this time we have gone on to grow in a solid and steady fashion. And we have achieved this by creating long-term, trust-based relationships, both internally, with our employees, and externally, with suppliers, customers, competitors, our operating environment, and so on. Over these years we have become a benchmark brand in the Spanish market. The specifications writers, applicators, users, etc. know us, know the quality of our products and the professionalism of our collaborators.

What distinguishes Mapei from other companies in the same market segment?

J.R.: Mapei is the largest producer in the world of adhesives, sealants and chemical products for the building industry, with a portfolio of more than 1,600 products and an annual turnover of 2.4 billion euros. The company has almost 9,000 employees throughout the world, 12% of whom work in its 18 R&D centres. We are a family firm that ploughs all its profits into investing in new markets, into improving our facilities and ensuring sustainable growth, always mindful of the impact on the environment, our employees, customers and applicators.

One of your major hallmarks is your commitment to innovation. Is this the key to achieving business success?

J.R.: We are convinced it is, and for this reason year after year we invest 5% of our annual turnover in research and development, and have 18 R&D laboratories across the world. At Mapei, investment in innovation is not exclusively geared towards moving in a technical direction; it is also aimed at achieving the lowest environmental impact and the greatest respect for the health and well-being of our applicators and users.

Indeed, innovation is one of the main drivers of change that will be seen at the revamped Barcelona Building Construmat, taking place in May 2017. What is your opinion of the evolution of Fira de Barcelona’s International Construction Show?

J.R.: We view it as a positive evolution that enables the show to adapt further to a sector that has been radically transformed over recent years and that still requires all the players involved to make an effort to reinvent themselves and adapt to a new reality.

What are the main innovations that Mapei will present during the show?

J.R.: I can’t reveal them all to you just yet as we want to keep an element of surprise with some of these innovations. But with regard to products, we will be presenting MAPETILES REMOVABLE SYSTEM, a rapid, fully removable soundproofing and isolating system that permits the overlaying of ceramic floors, such as with large format, thin tiles, enabling the surface to be ready for use within a few hours. We also want to promote our MAPECRETE SYSTEM, a system that is the result of extensive research work carried out over many years, at both a micro- and macro-structural level. In Spain we have specialised in the design and application of shrinkage compensated concrete with MAPECRETE SYSTEM for concrete flooring, for both ground and structural slabs, with more than a million square metres executed and serving as a reference model.

And to round off, how do you see the future of Mapei and of the sector?

J.R.: Promising. New doors are opening as are new niche markets and we have many systems yet to develop and adapt within our 15 business areas.