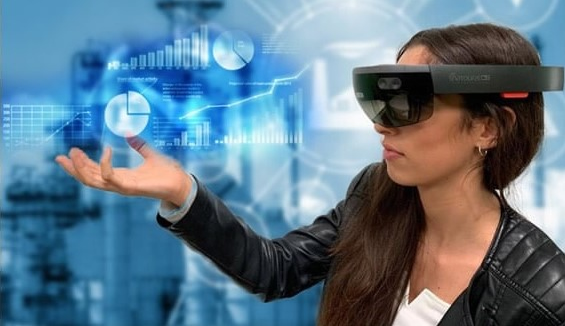 The incorporation of augmented and virtual reality technologies into companies’ daily processes is already a fact that is radically changing the way in which productive processes are being carried out. A real revolution is taking place in the industrial and construction sectors, offering tools for the management and control of works, production and assembly lines which are unprecedented.

Far from being generic technologies, they are completely customised applications and solutions that can range from a simple augmented reality App which can present an architectural or civil engineering project, to platforms and training systems for industrial plants.

It is important to clarify that augmented, virtual and mixed reality use different technologies in the way they work, and they are applied to hardware as well as software. In this field we find, on the one hand, IT equipment, which enables the creation of virtual models and, on the other hand, devices such as smartphones, helmets, viewers or simulators that serve as a link between the user and the generated content. There are also a series of peripheral elements, converted into a parallel business model, which improve interaction and immersion between the person and the virtual world, such as controls, sensors, gloves and haptic suits, among others.

So, do you know the difference between virtual, augmented and mixed reality?

Virtual reality (VR) is based on the creation of elements in an unreal world so that the user can interact with them. Virtual reality encompasses any type of imaginary content, from a video game to an application for training operators of an industrial plant. For this reason, any medium which can give free rein to the imagination will serve as a virtual reality device. The immersion factor is fundamental to achieving greater interaction with the virtual elements. Today, the most common form of interaction is still through the use of PCs, keyboards and the mouse, although with the emergence of smartphones the way of interacting has changed: it is much more intuitive and simpler through the use of touch screens. Among the most widely used software for content creation are programs such as the Autodesk Suite, Rhino, Sketchup and Blender, among others. For programming applications, depending on the device they are designed for (Android, iOS, Windows, etc.), programs such as Android Studio, Xcode, Visual Studio or game engines that allow multi-platform applications to be made can be used. Among the most popular game engines used are Unity and Unreal Engine.

Virtual reality applications for the construction, architecture and engineering sector are robust and powerful solutions that are both simple to handle and useful. Using this technology, the user can be transported to totally virtual 3D environments or to real environments that are geographically distant through photos and 360° video tours. The most common uses of virtual reality in architecture, engineering and related sectors are:

Unlike virtual reality, augmented reality (AR) aims to superimpose extra information on reality. To do this, devices with cameras will be needed to capture reality, which can then display virtual elements on the screen (information, images, videos, 3D models), superimposed on the real physical environment. All this process is done in real time and recorded in 3D.

For example, for an industrial or construction site environment it is possible to simply scan a valve with a smartphone camera and obtain all the necessary information such as the data sheets, the individual components, its exact location within the construction site, its schematics, the 3D model as well as the correct way to use it.

Additionally, thanks to devices such as virtual reality glasses or tracking gloves, which perfectly reflect our movements and interactions, along with the recreation of real sounds and environments, it is possible to achieve a totally immersive experience.

Therefore, it seems clear that the application of VR and AR technologies in the production lines of industrialised construction processes is a very effective tool, as it allows operators to have all the information necessary to carry out their task without having to leave their work station.

A practical example of the application of this technology would be a production line for prefabricated elements such as prestressed beams or precast footings. In these processes, the deployment of reinforcing frames is required, as specified in the assembly drawings.

By using augmented reality glasses, all of this information, including the holographic 3D model, is shown in real size on the work bench. Thus, the operator merely has to place the different parts in the same position as the virtual elements, visualised through the glasses.

Once all the elements are located in the right place, the operator will be informed that it is time to carry out the welding as well as the exact place. This considerably improves three main aspects:

a) the execution times: looking at the plan, measuring the distances between parts and transferring them to reality;
b) improving the quality and reducing human error: junior operators performing complex operations supported by all the information and also by remote assistance from a senior operator;
c) safety in the working environment: avoiding unnecessary movements or actions that could be counterproductive for the operator.

It seems evident that the inclusion of virtual, augmented and mixed reality in companies means an improvement in the quality with which work is executed, given that it is carried out using greater precision and following guidelines and criteria in real time. All this helps to create much safer working environments in which human risks and errors can be controlled, analysed and addressed in real time.