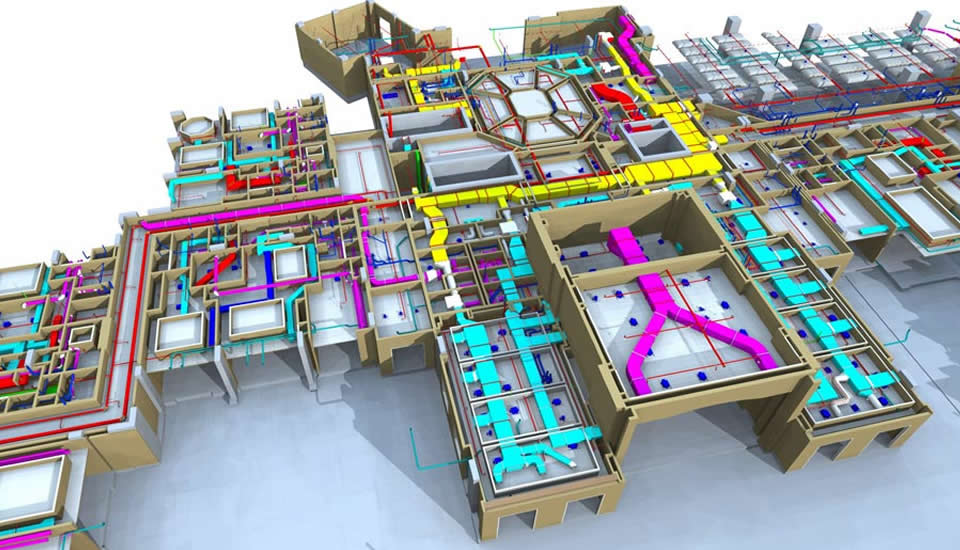 It is interesting to see how the force with which BIM entered the construction sector has evolved. In fact, I think it would be impossible for this concept not to come up in a discussion about a building project. It is also interesting to look at the differential in terms of how quickly it reaches different groups and stakeholders.

Another area of interest is the analysis of a different aspect of the BIM dimension, that which relates, in this case, to its capacity for implementation in different areas and moments of the construction process. For the first time, we are adopting a concept that comes from the world of sustainability, that of the ‘life cycle’, which looks at everything related to a material, product or service from beginning to end and is now being used in the construction sector.

“We were never interested in the “life cycle of a construction project”; we never cared about the traceability of the entire process.”

We have learned that BIM is not a concept but that it responds to three concepts at once: BIM is a tool: think of the computers and the software we need to generate a digital model; BIM is a method: the only way we can perceive potentially improving the life cycle of a construction project is as part of a collaborative process, by breaking away from something as traditional as the verticality that affects those that make it possible—the promoter and the rest of the stakeholders, the architect as sole author of the project ahead of all the teams that help shape the design, the building engineer ahead of the builders, the builders ahead of the subcontractors, the maintenance manager ahead of the fitters—to move towards ‘levelling out’ this hierarchy, ‘horizontalising’ it and promoting the fact that the person that now holds the power is not the one with the information but the one that distributes it; and BIM, ultimately, is an end goal, which can be very hard as its objective is turning the construction sector into an efficient, industrial—or productive—sector and, therefore, its ultimate goal is to help industrialise construction. 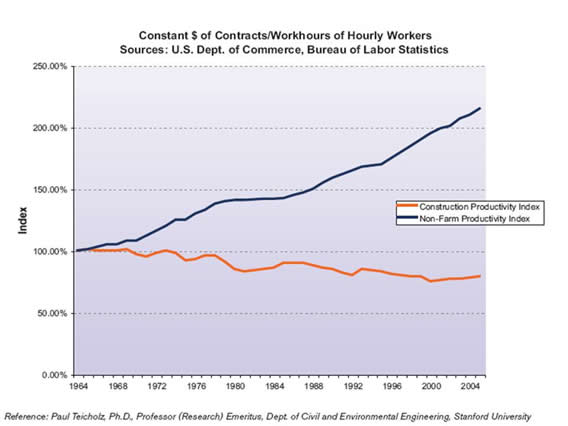 This graph illustrates an ongoing loss of productivity in the construction sector for a country such as the United States (¡). The construction sector requires more people, more resources, more materials, more time and more energy than it did 40 years ago to carry out the same amount of construction. Imagine the graph in our own country

The ‘I’ in BIM stands for Information and is the part where its added value really lies. And that is why there is a debate about the dimensions of BIM, to which a mathematical value has been assigned: the n-dimensions of BIM.

Some are only interested in BIM’s third dimension; the digital model of a building or infrastructure. Some are starting to show an interest in what is known as the fourth dimension of BIM: the relationship between the digital model and planning, since we can now assign a timescale to each construction element and finally visualise the construction process element by element through the introduction of the relevant information, thus generating an accurate plan. Some are starting to work hard towards linking this three-dimensional BIM element with project price, thereby reaching the fifth BIM dimension. And almost nobody reaches the sixth BIM dimension, which deals with the sustainability of the cycle. In countries such as the United Kingdom, this is seen as an important issue and forms one of the four axes of its active leadership in the BIM sector: the objective of reducing CO2 emissions throughout the construction cycle by up to 50% by the year 2025.

Perhaps we are now beginning to hear about the seventh dimension of BIM, that which corresponds to a very important part in terms of controlling the cost of something we have built, not during the years of construction but during its decades of existence and operational afterlife (in general terms we take a building to be a year in the planning stage, two years under construction and with a useful life of at least 50 to 80 years).

Those of us who evangelise about BIM—a necessity since it represents a new religion and we know how difficult religious conversion is as it affects all the pre-established beliefs we have learned throughout our lives—have identified the difficulty that those involved and participating in this life cycle have with understanding why BIM dimensions go from the third to the seventh. And, as a result, we all end up developing our own theories.

My theory, aimed at giving this evangelisation a helping hand, consists of 10 dimensional areas in which BIM acts. They are based on the more strategic aspects of BIM: the first dimension is that of its implementation (an element that includes the approval of a mandate or regulation by a country’s public administration in order to accelerate the process of BIM adoption and thereby instantly save money and resources); the second dimension involves collaborative processes (some assert that this represents BIM’s real area of contribution), in which it is not so much about the technique employed but rather the participation of the people involved. We have already talked about the third, fourth, fifth, sixth and seventh dimensions.

The eighth dimension—which comes first in countries where the culture is heavily focused on safety, such as in Nordic countries—relates to BIM in terms of health and safety and is commissioned with a very difficult task: to reduce accident rates and eradicate workplace risk in a sector that permits levels of personnel loss not tolerated in any other industrial sector. The ninth dimension is that of Lean Construction, that is capitalising on the methodology that companies like Toyota developed more than 50 years ago to improve their processes and prevent the waste of time and resources during production. And, lastly, of course, the objective of BIM: the tenth dimension relates to the industrialisation of construction, which involves working as much as possible offsite, in modular form, and the use of MMC (modern methods of construction) to achieve maximum efficiency and productivity during and throughout the course of a construction project.

Welcome to BIM, welcome to the paradigm shift